If your system does not have this app available, you can install it via the Marketplace.

You can find this feature in the menu system at the following location: 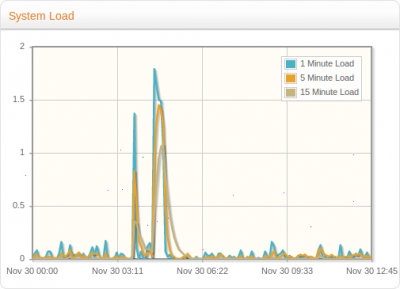 You can think of System Load as a way of measuring how much the CPU is in demand. On a typical ClearOS system, you should see average loads below 1.0. Keep in mind, it is perfectly normal to have temporary spikes above 1.0, so please do not be alarmed when that happens. You can see an example of this phenomenon in the adjacent screenshot. In this case, a file indexing service on a system with several terabytes of data runs daily. If you see sustained loads over 1.0, it likely means that either your hardware is underpowered or a bottleneck of some kind exists.

For systems servicing a large network with a lot of RAM and CPU power, a higher system load can be expected (2, 3 or 4). Even with a higher load value, the system can still be very responsive and is not necessarily underpowered. 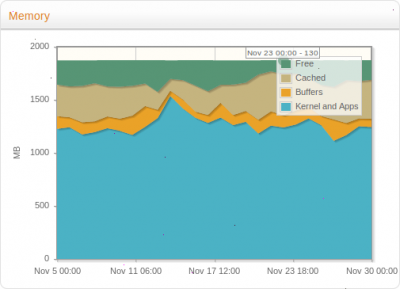 ClearOS does not like to see RAM/memory to go to waste! For the vast majority of deployments, memory usage will reach 100% of RAM. Why? Spare memory capacity is used to speed up the system by using caching. For all intents an purposes, the Cached memory shown in this report should be basically be considered “free” memory.

To make a long story short, the Kernel and Apps plus Buffers should be comfortably below the total amount of RAM. Occasional bursts are nothing to worry about, but the fastest way to dramatically slow down a ClearOS system is not providing enough RAM/memory.

When your ClearOS system is short on RAM/memory, it turns to Swap Memory stored on the hard disk. Since swap memory is hundreds of times slower than RAM, it is worth checking this report if your system seems sluggish. Seeing a small amount of swap (20%) or temporary spikes is not unusual. A sustained level above 50% used is a sign that more RAM is needed.

The Uptime graph simply shows the number of days your system has been up and running since its last reboot.