Software, BIOS-based, and hardware RAID (redundant array of independent disks) have supported methods in ClearOS. It is important to understand the benefits and deficiencies of different types of RAID if you are going to implement RAID with ClearOS.

The following table reviews RAID categories and their relative strengths and weaknesses compared to other RAID types on the list. If a formula is given, N is the number of drives that you are using. Tolerance is a relative measure of the number or fraction or percentages of the disks in the array that can fail before the dataset is lost (the higher, the better.) Utilization is a measure or percentage of drives that are utilized for real data. Support indicates whether Hardware, Software, or BIOS-based RAID is supported for the RAID level listed. Perf (Performance) lists a relative speed of performance in comparison to other RAID sets. Bootable demonstrates if the configuration is bootable. Comments lists some helpful hits.

*Requires an even number of drives

There are advantages and disadvantages to each of the technologies that you can select for RAID. You should choose the one that best fits your needs.

It is recommended that if you use hardware RAID, you familiarize yourself with the methods and procedures of recovering your RAID in event that your RAID controller fails. This is critical because if you are not prepared beforehand, you can waste a lot of time searching for answers, some of which may be destructive to your data. Things like mismatched firmware with replacement RAID controllers can lead to extensive downtime and even loss of data. You don't want your RAID card to increase the likelihood that you lose your data so be prepared and put together the notes and information on how to recover from such a potential in a safe place.

You will want to install the Linux tools for your RAID card after the completion of your ClearOS installation in order to get the management and notification abilities that come with your RAID card. As mentioned previously, you are likely on your own for the implementation and you should seek guidance from your hardware vendor for support under ClearOS. If you are using HPE RAID cards approved on the compatibility matrix for ClearOS (not DSA, BIOS RAID) then you can contact ClearOS Support professionals for assistance if your subscription entitles you to support.

Some hardware RAID controller cards are not true hardware controller cards. If your configuration for RAID is in your regular computer BIOS, please refer to the BIOS RAID section. From the 'Managing RAID on Linux' book from O'Reilly:

If you have a hardware RAID controller and still would like to use software RAID, configure your RAID card for JBOD or set up individual disks as stand-alone RAID 0 devices (JBOD is better). Not only will you get better support, but potentially more performance and ability to transition to another controller without worrying about firmware matching.

Unsupported and not recommended:

As a rule of thumb, if a hardware card is under USD $150, then it is probably not true hardware RAID and either not recommended or not supported.

BIOS RAID support is accomplished by configuring a RAID set in the BIOS. ClearOS will see the disks using the 'dmraid' drivers. Our recommendation is to use Software RAID instead of BIOS RAID since the success rate is much higher for implementation and recovery for software RAID from a ClearOS support model.

You can implement software RAID in ClearOS by selecting the I will configure partitioning option in the installation wizard. 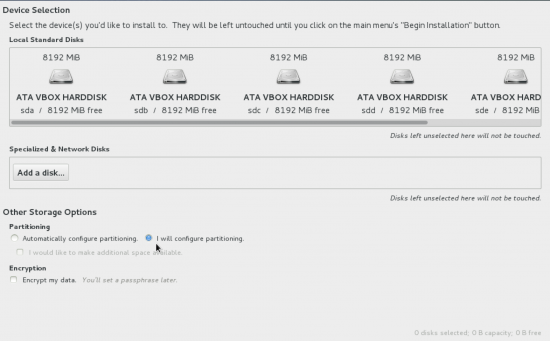 You can find tips and tricks about partitioning in the section Configuring Partitions and RAID.